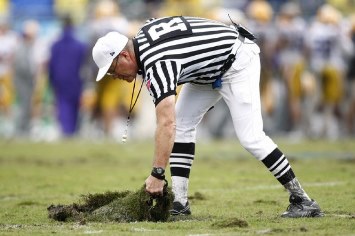 Local media attention narrowed against the City of Orlando Venues department recently, largely as the result of the litigation work we did in our recent case involving poor turf conditions in the Orlando Citrus Bowl in the 2009 Champs Sports Bowl.  (In fairness, the photo above shows the turf during the 2009 Capital One Bowl, but this was the same turf that our client, Graig Cooper, was injured playing on just a few days prior.)

In his second major article regarding the case, local journalist Mike Cantone (@mikecantone), details how little Orlando Venues Director, Allan Johnson, seemed to know about the readiness of the Citrus Bowl playing surface for the 2009 bowl games.  Many Central Floridians will remember that field conditions at the Citrus Bowl in 2009 were deplorable.

After reading Mr. Cantone’s article, Bob and I were both surprised that Allan Johnson actually answered, “I don’t recall” approximately 70 times during his deposition.  We knew he provided that answer to a lot of our questions, but we couldn’t imagine that it was close to 70 times over the course of a couple of hours of questioning.

Many witnesses in legal cases think it plays to their advantage to answer questions with “I don’t recall.”  In some cases, it is probably a truthful answer - which is perfectly fine.  Other times, perhaps witnesses reason that if they don’t give substantive answers, those answers cannot be used against them later.

However, at some point, “I don’t recall” starts to look pretty poor.  When it is used a significant number of times (like in this case with Allan Johnson), it can begin to seem disingenuous and can make a witness look like he or she is either incompetent or trying to hide something.

Ultimately, we will never know what an Orange County jury would have thought about Mr. Johnson’s testimony, since his employer, the City of Orlando, decided (along with the other Defendants – two sod companies, and Florida Citrus Sports) to settle our client’s case.  Of course, lawsuit settlements happen for a variety of reasons.

Congratulations to Mike Cantone for doing the background journalism work to write such an informative and well-written piece.

If you have any questions regarding any kind of unsafe premises, or any Central Florida personal injury matter, call Winter Park personal injury attorneys Kim Cullen and Robert Hemphill at 407-254-4901.