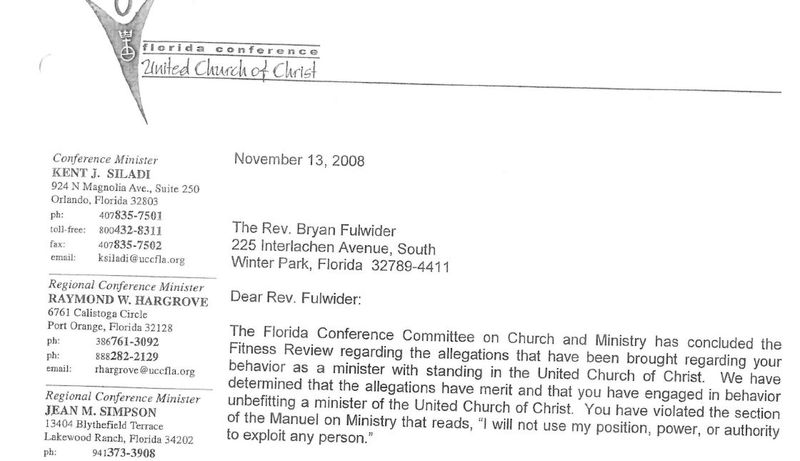 Many Central Floridians may already be aware of the story I blogged about here a few weeks ago - wherein the Orlando Sentinel reported that a young woman had come forward alleging that Bryan Fulwider, a local pastor, had groomed and sexually abused her for years beginning when she was 13 years old and a parishioner at his former church, First Congregational Church of Winter Park.

Obviously, stories like this one are tragedies.  Unfortunately, as a Florida child sex abuse attorney, I’ve seen and heard them all too often.  They still get to me.
Any time an adult abuses a position of trust to sexually molest a child, I am a firm believer that the abusive adult needs to face justice.  We now know this isn’t going to happen for Mr. Fulwider. While out of jail on bail waiting for trial, Bryan Fulwider committed suicide a few weeks ago.

Once Mr. Fulwider’s death was reported, I thought the story was over.  Boy, was I wrong.

Fulwider's Church Was Warned About Him Back In The Early 2000's

According to documents gathered by the Sentinel - one of which is posted above - the Florida Conference of the United Church of Christ, the organization that oversaw Fulwider’s Winter Park church, found the women's allegations to be credible.

However - rather unbelievably to me - the church allowed Mr. Fulwder to keep his job, and in turn, allowed him continued pastoral access to young, impressionable women.  It appears it was during this period of time that Mr. Fulwider began abusing the woman who was the first to come forward.

Churches can be held liable for money damages when they fail to properly supervise their employees and staff, and the employees or staff use their positions in the church to sexually abuse others.  We are proud to regularly represent victims of sexual abuse.